Underhill House, in the Cotswolds AONB, was the very first passivhaus building to be certified in England, and was filmed for Channel 4’s Grand Designs Cotswolds, 2010.

Underhill is also notable for having been the practice’s first project to have been granted planning permission under what is now paragraph 80 of the National Planning Policy Framework (NPPF) – what was then paragraph 11 of PPS7, a policy which gives / gave special dispensation for new houses in open countryside which are considered to be ‘truly outstanding and ground–breaking’ and to reflect ‘the highest standards in contemporary architecture’.  It was at the time (permission granted in 2007) one of only 20 projects across the UK to have ever been granted this very special planning permission.

Located in the heart of the Cotswolds, Hill Barn was a derelict 300 year old stone structure situated in a prominent and beautiful location at the top of a hill in an Area of Outstanding Natural Beauty.  Being in AONB open countryside, together with the fact that there was a Housing Moratorium in the area at the time, made the prospect of obtaining planning permission extremely unlikely.

These challenges were addressed by proposing to convert the barn into an office, and to slot the new house in underneath it.  So, despite the sensitive location, the design of the house was able to be very bold.  The existing barn has been carefully restored, whilst the new building underneath and adjacent to it is in contrast strikingly modern.  Being dug into the hill to be invisible from the surrounding countryside, this is essentially a stealth house, with absolute minimal visual as well as environmental impact on the landscape.

The project presented a unique opportunity to bring the German passivhaus standard to the UK, as it was at the time relatively unheard of here.  Happily, that is not the case now, with the passivhaus standard now being relatively common in the UK, not just for private houses, but also for a diverse range of projects, such as housing association schemes, offices and schools.  This film (courtesy of Pinwheel Structures) explains the concept brilliantly: Passive House explained in 90 seconds.

Heat from the sun, activities such as cooking, watching television and showering is retained by the building, and as a result of being highly insulated, airtight, and using mechanical ventilation with heat recovery, the need for a central heating system is eliminated.

A large photovoltaic array (which also doubles as solar shading to the south facing glazing) and an innovative roof-integrated solar hot water system provide most of the house’s energy requirements, topped up in winter by a small wood burning stove with back-boiler.

The plan is L-shaped to maximise the amount of natural light, with all bedrooms and living spaces benefiting from full height glazing.  By being all on one level, the amount of circulation space is minimal, resulting in a very spacious and dramatic central open plan living space.

There are dropped ceiling panels for acoustics and to define different areas within the large open plan main living space. Internal block walls are mostly white to bounce light to the back of the plan, further aided by an innovative fibre optic lighting system.

Progress photographs of the build can be found here: 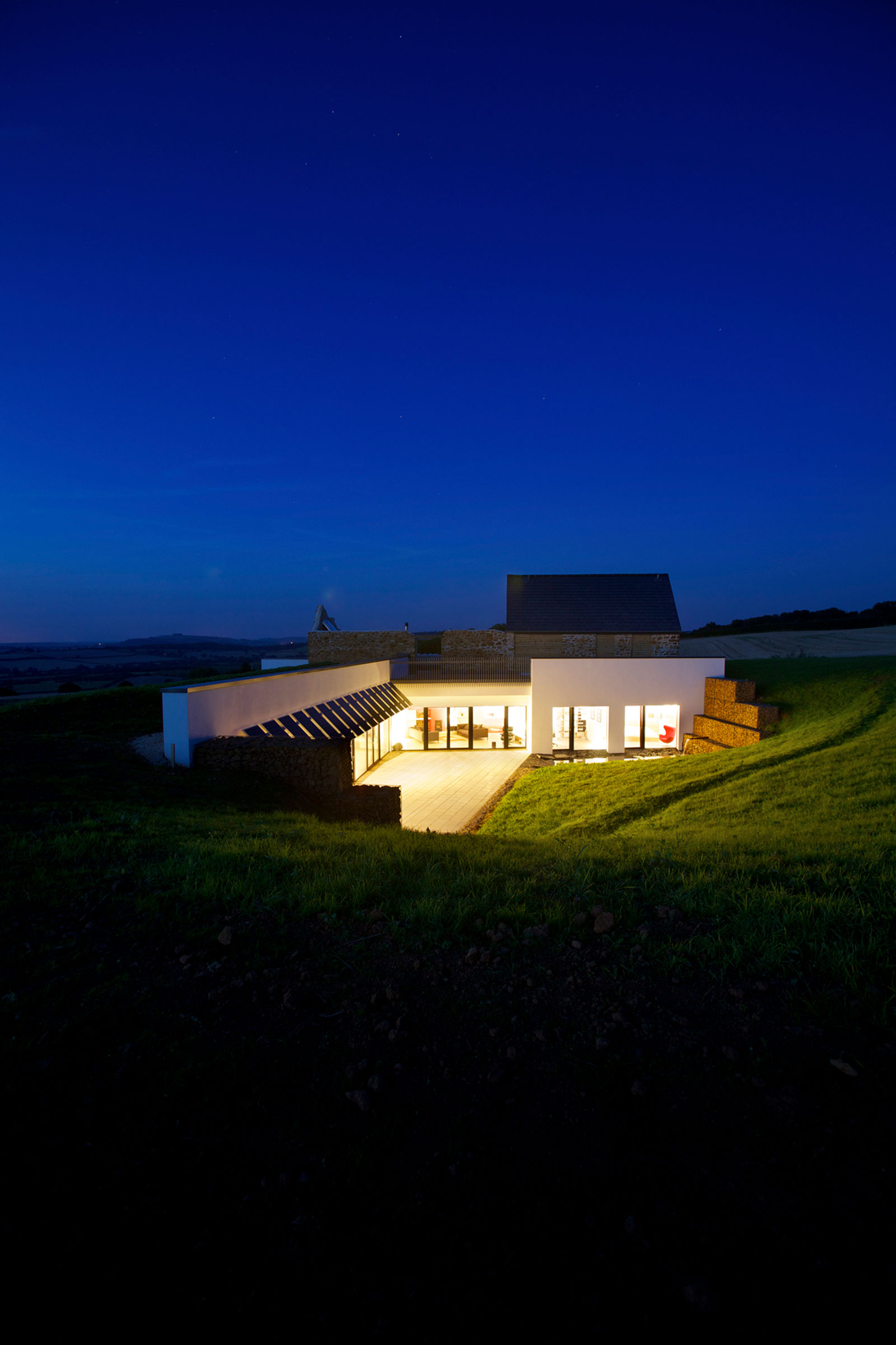 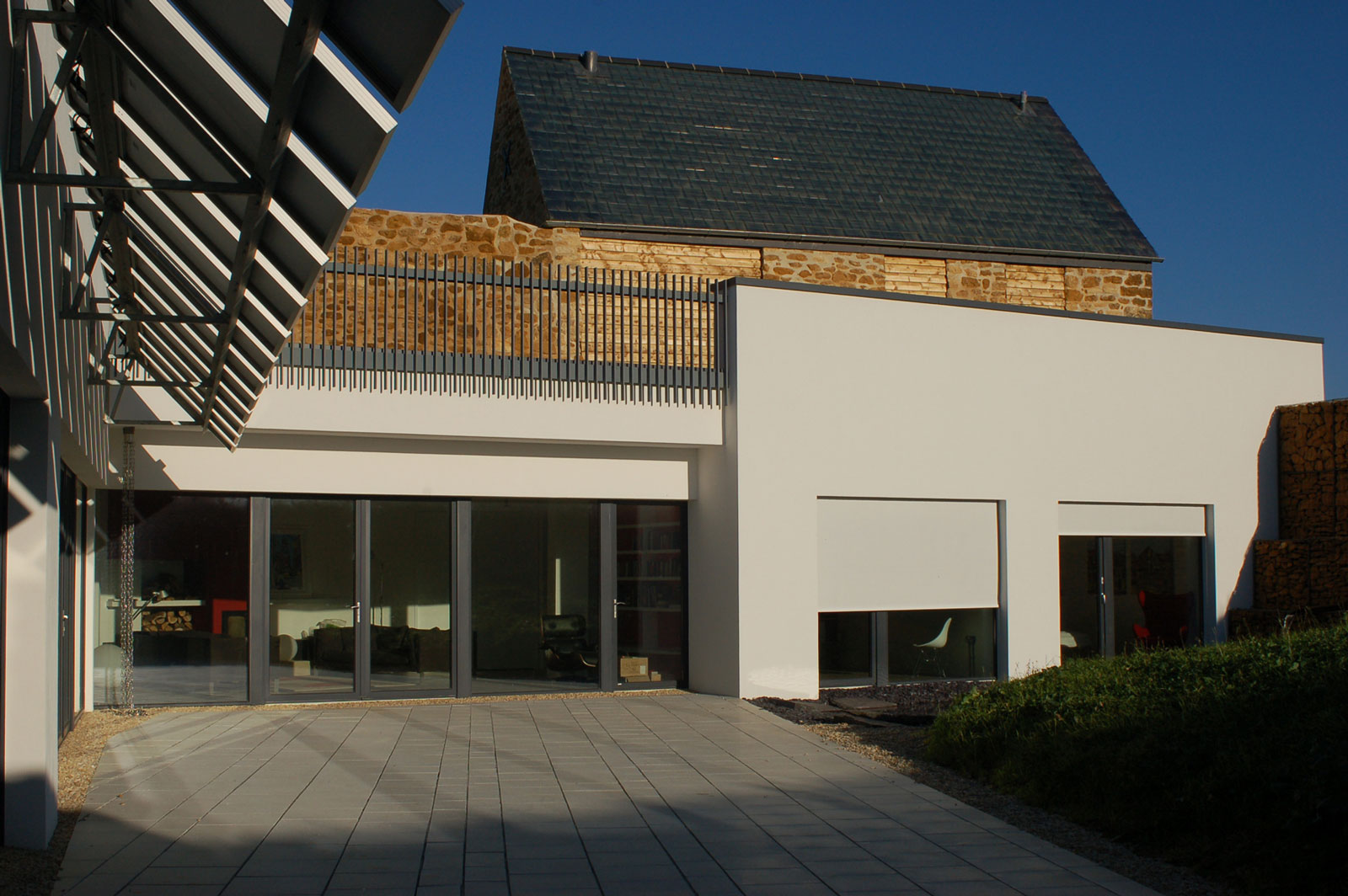 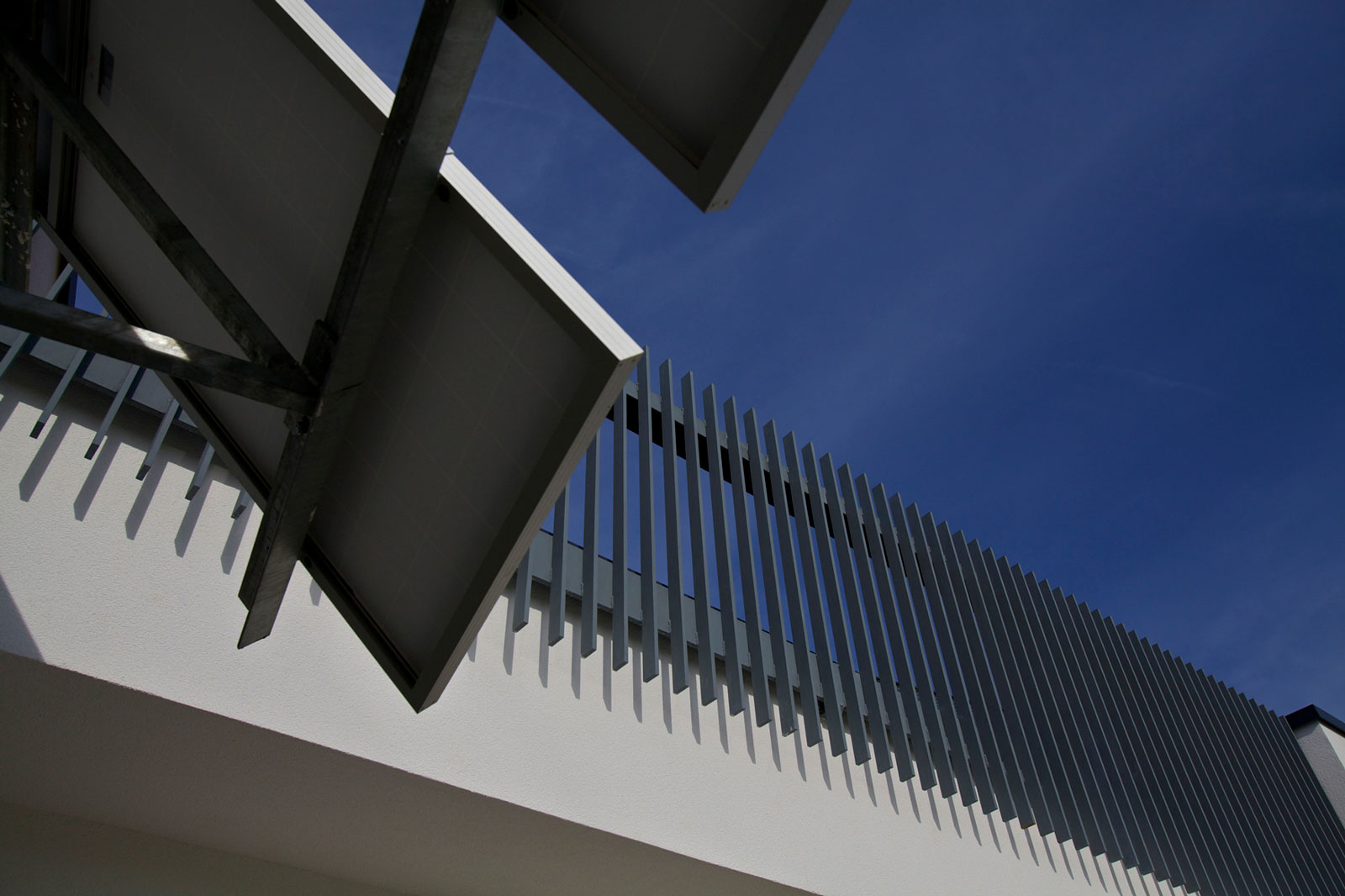 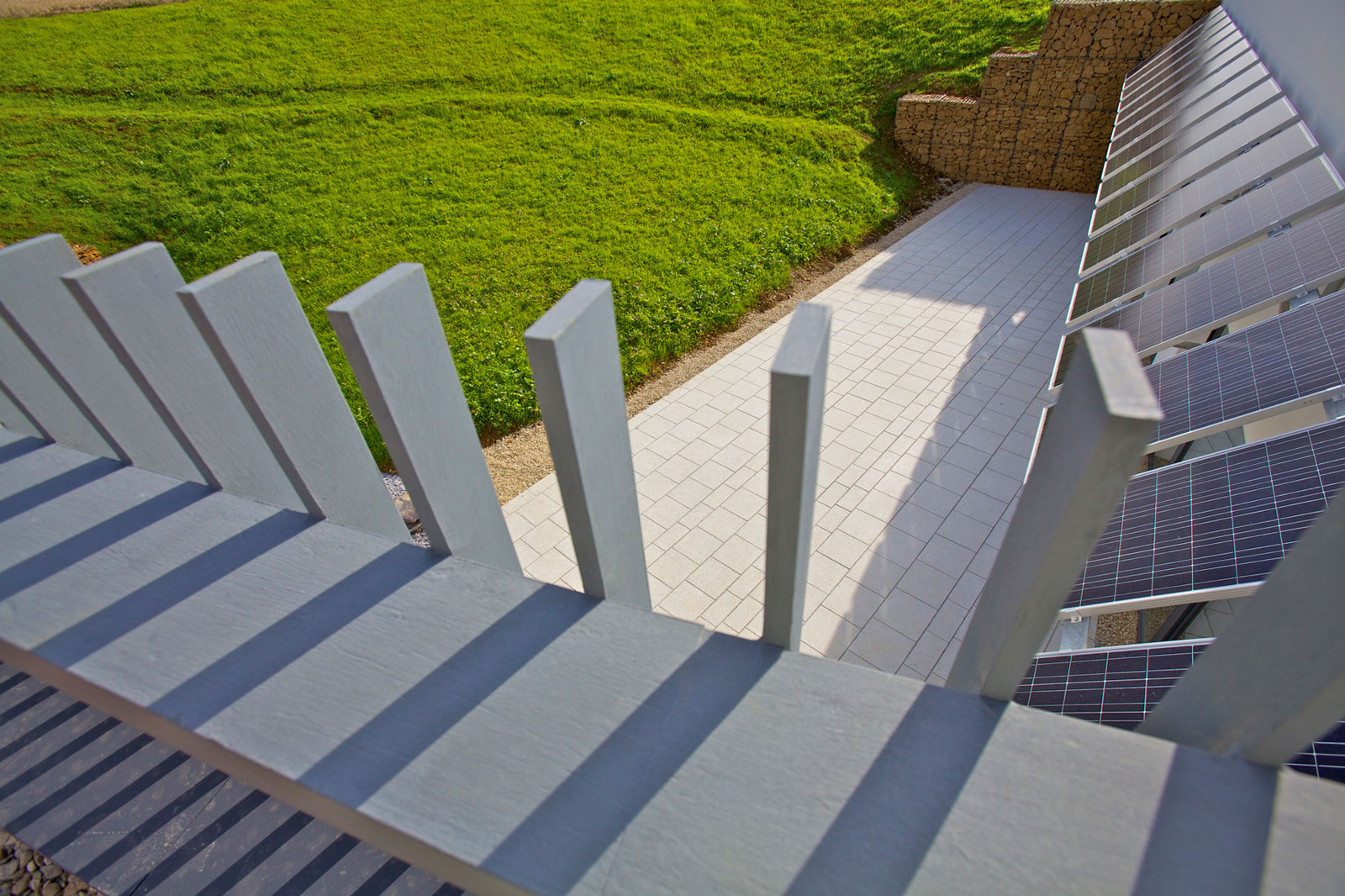 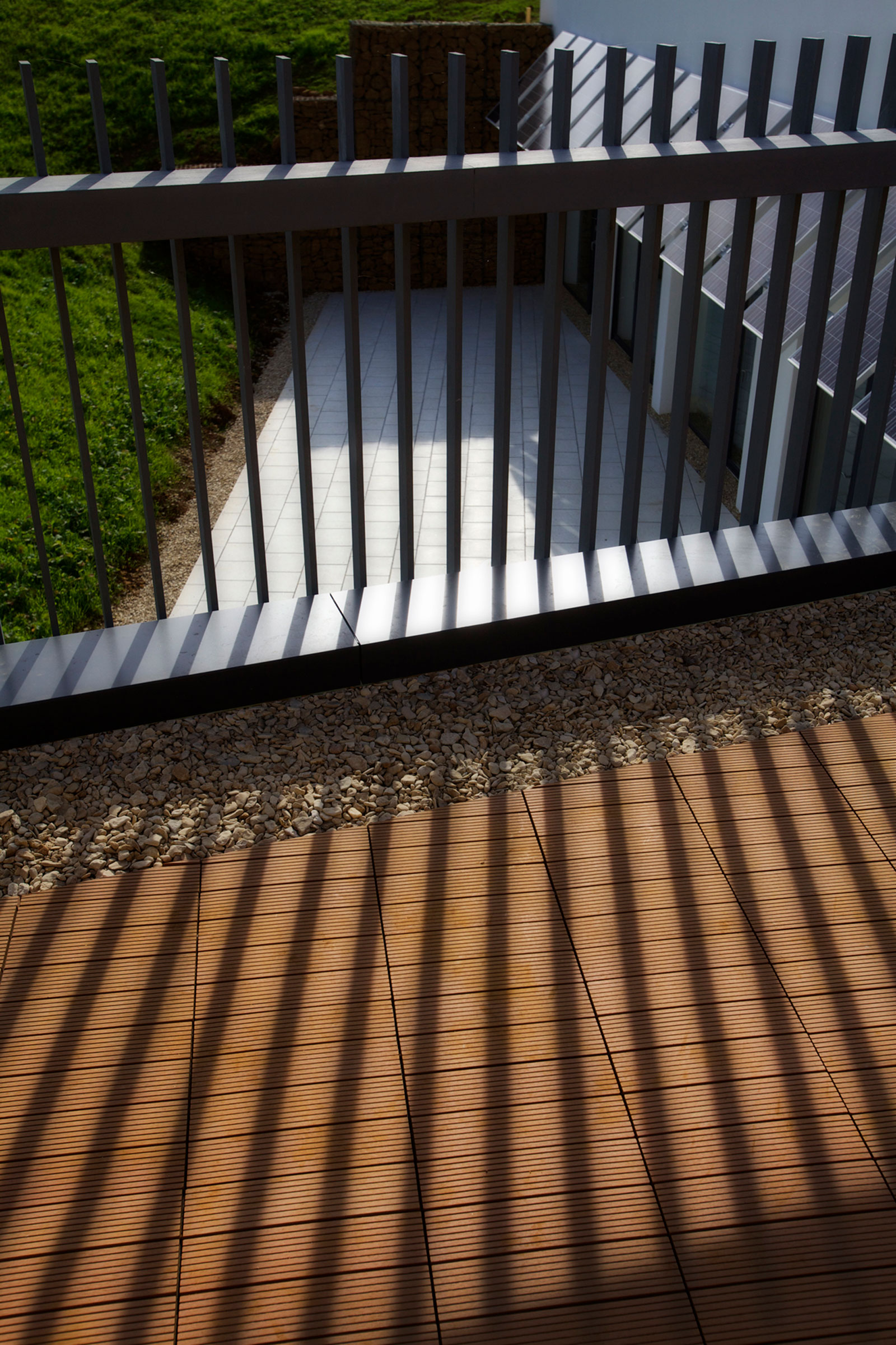 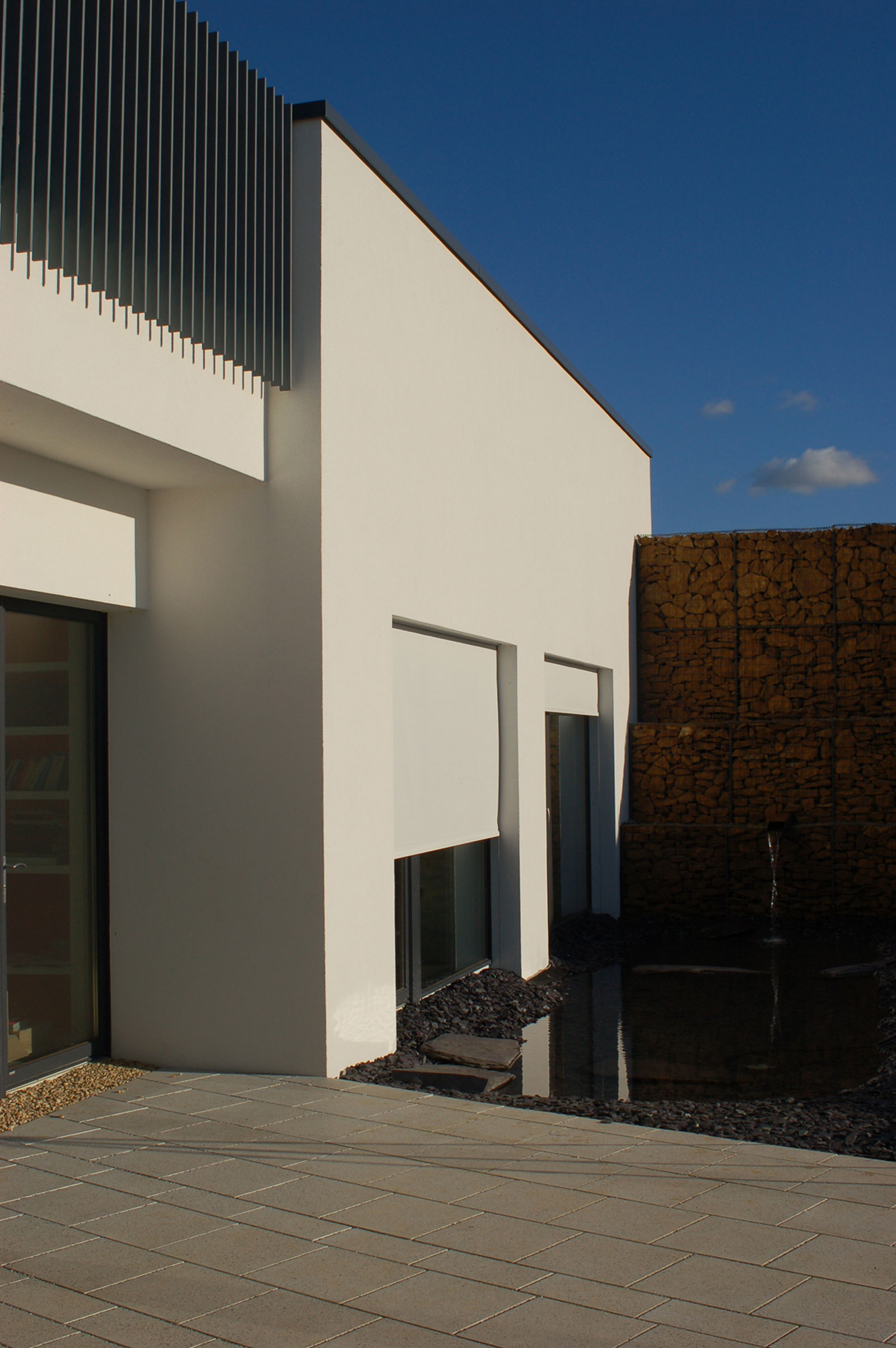 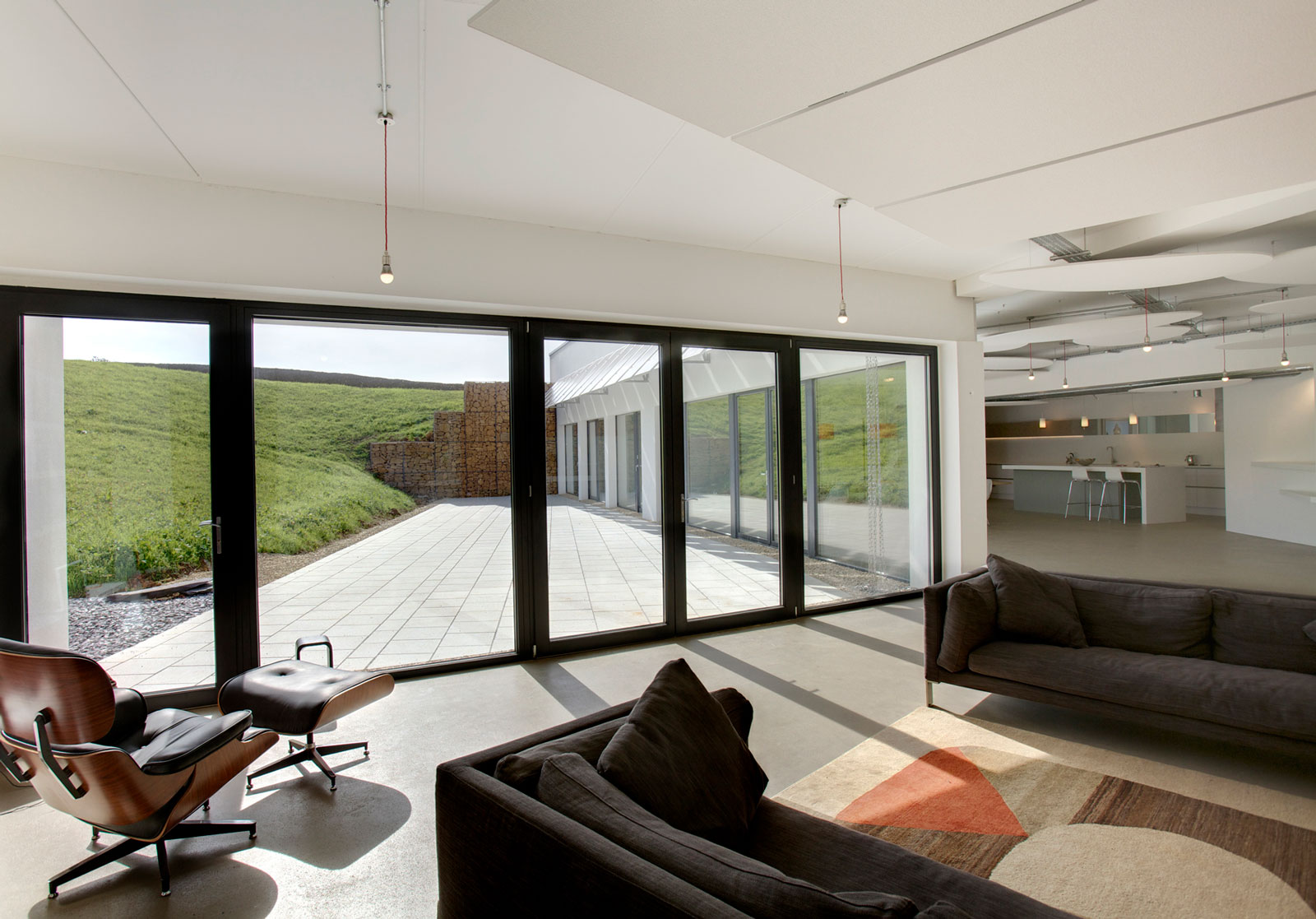 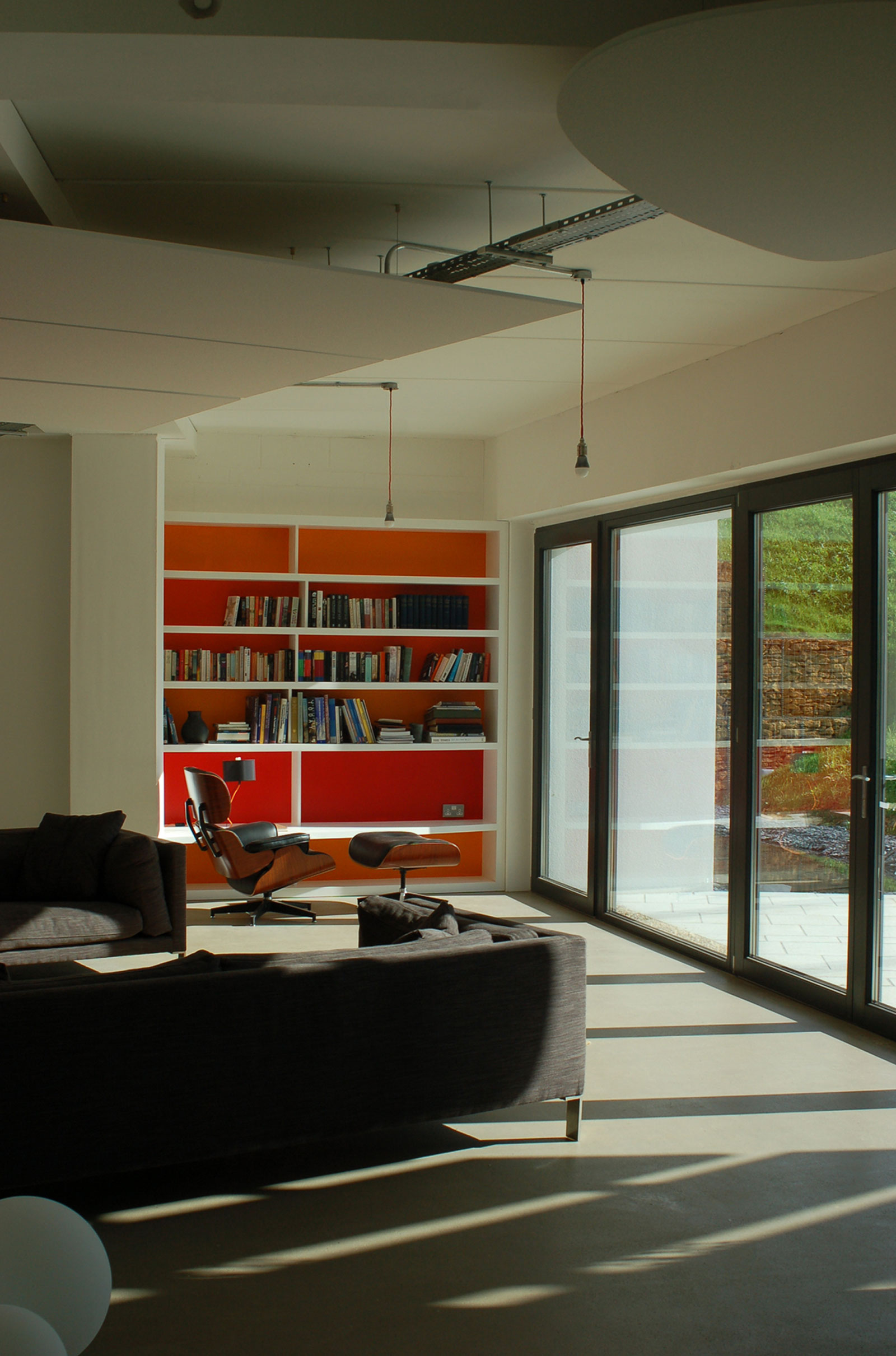 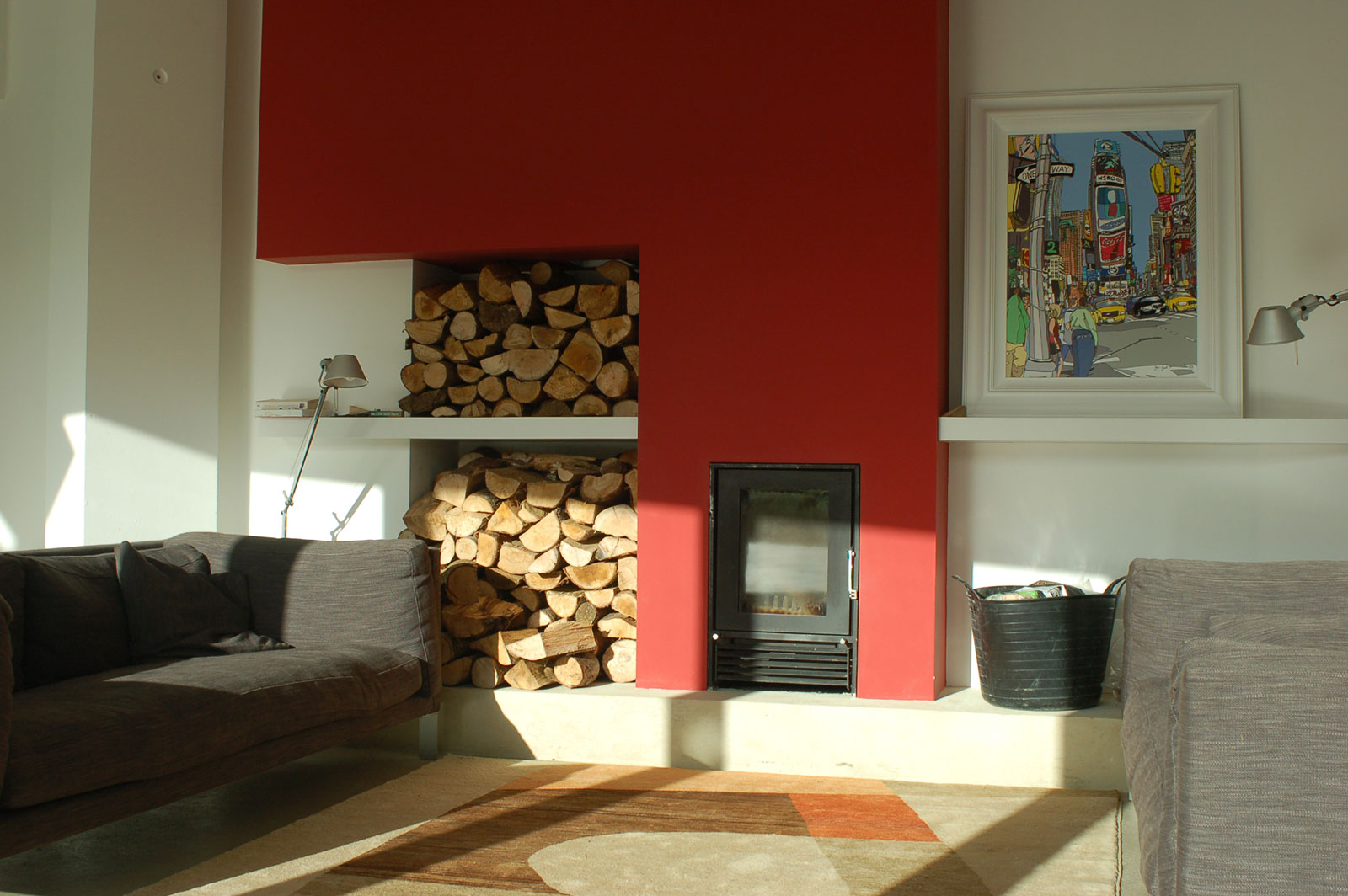 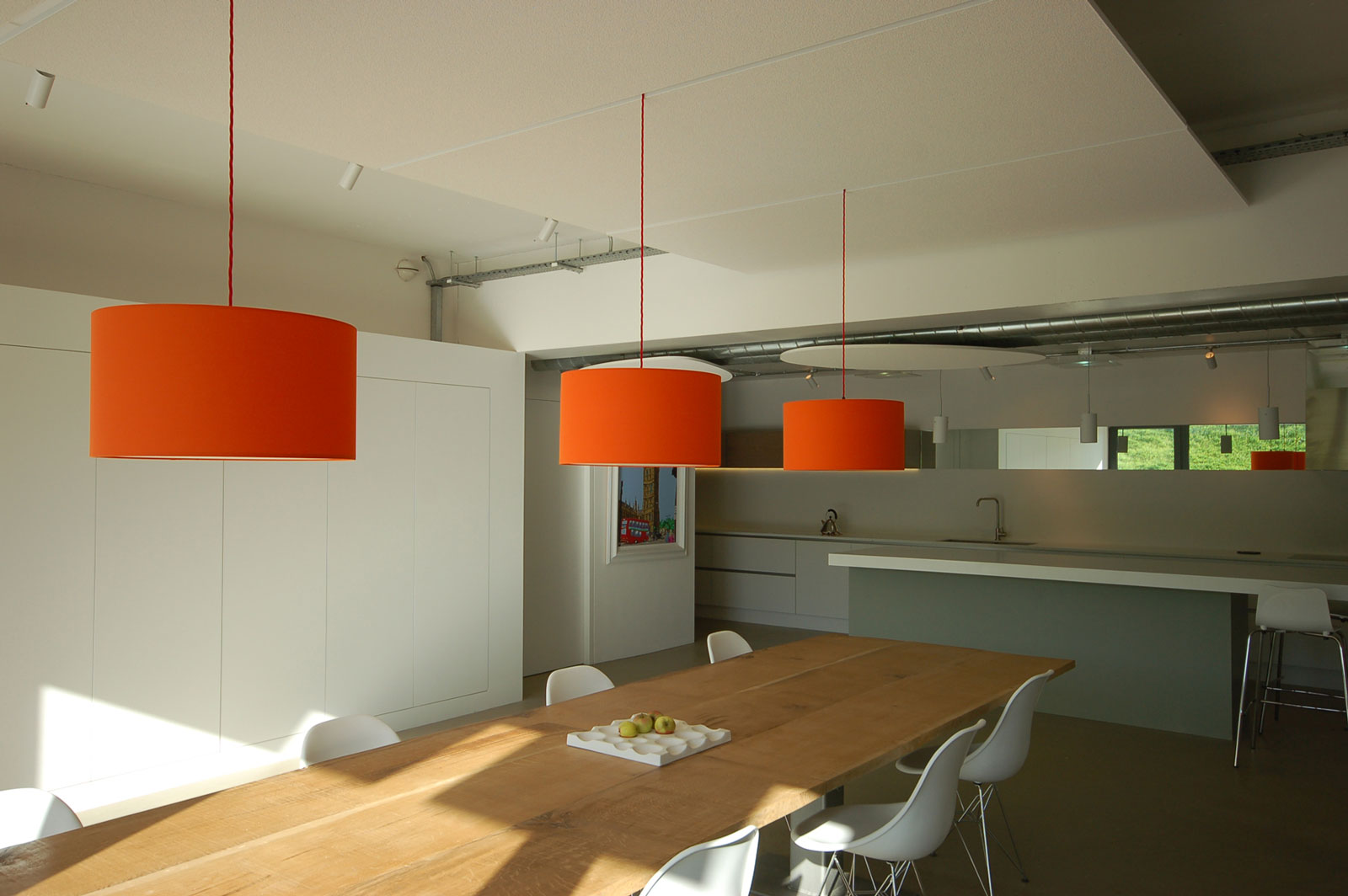 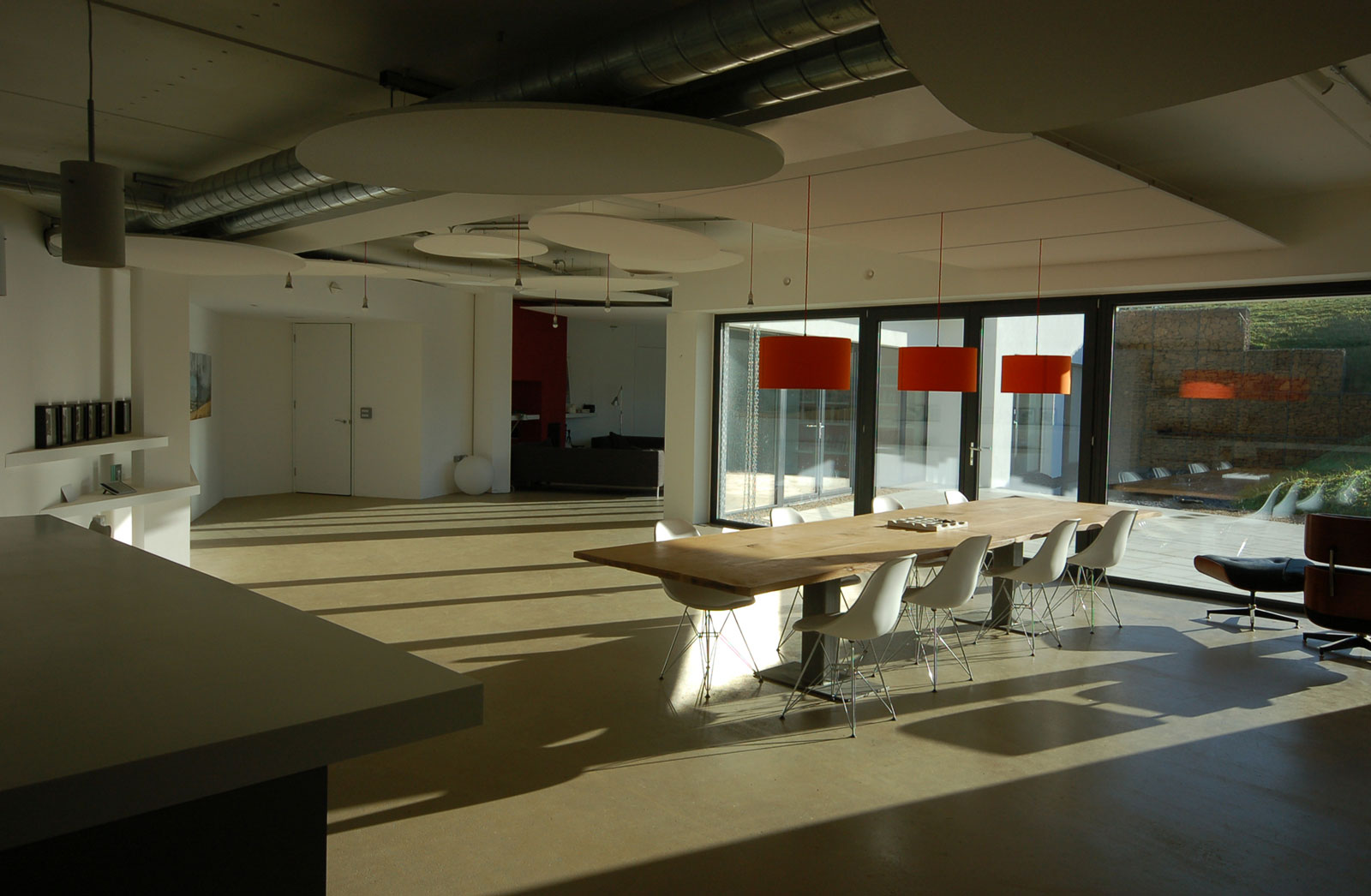 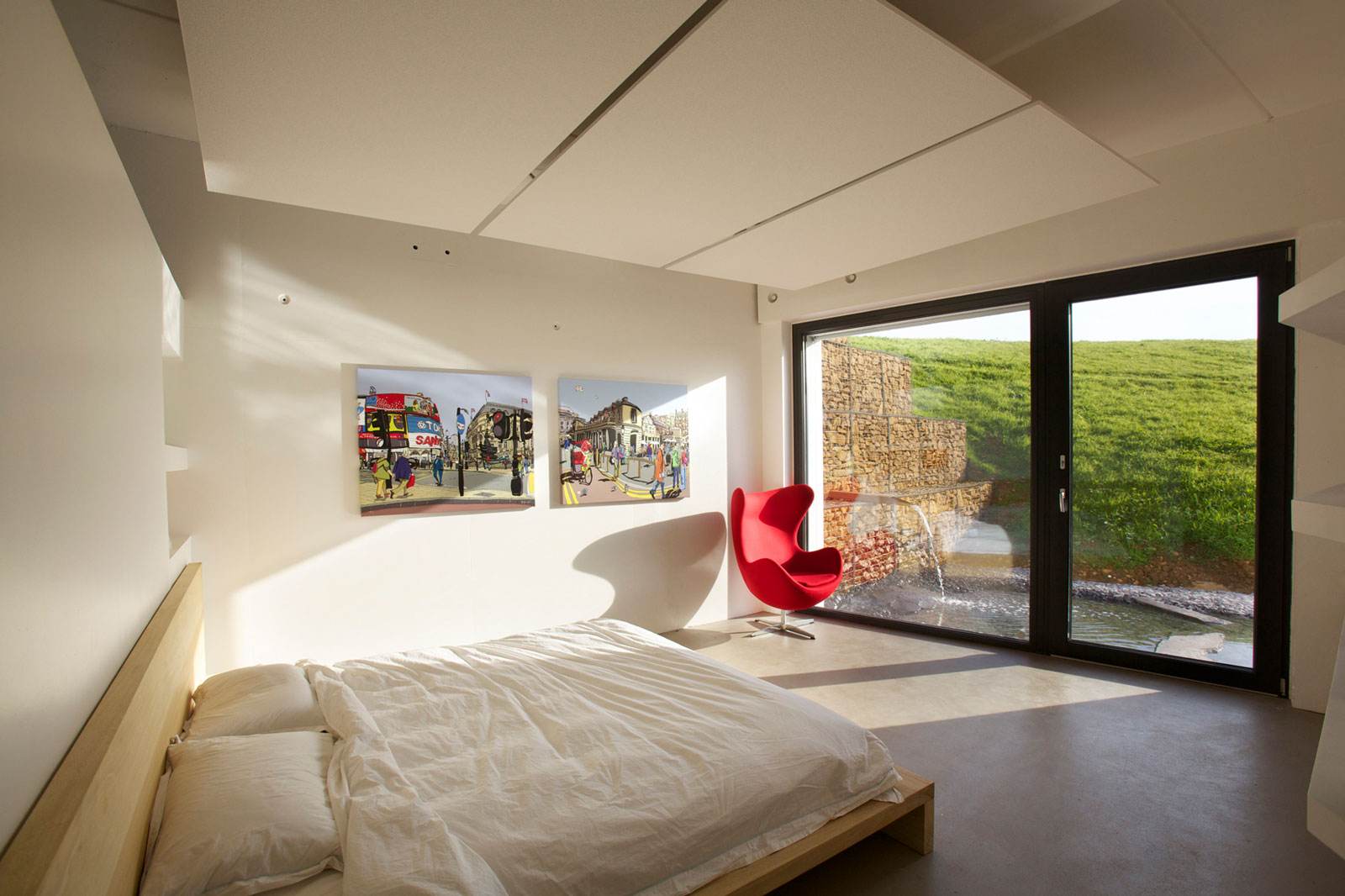 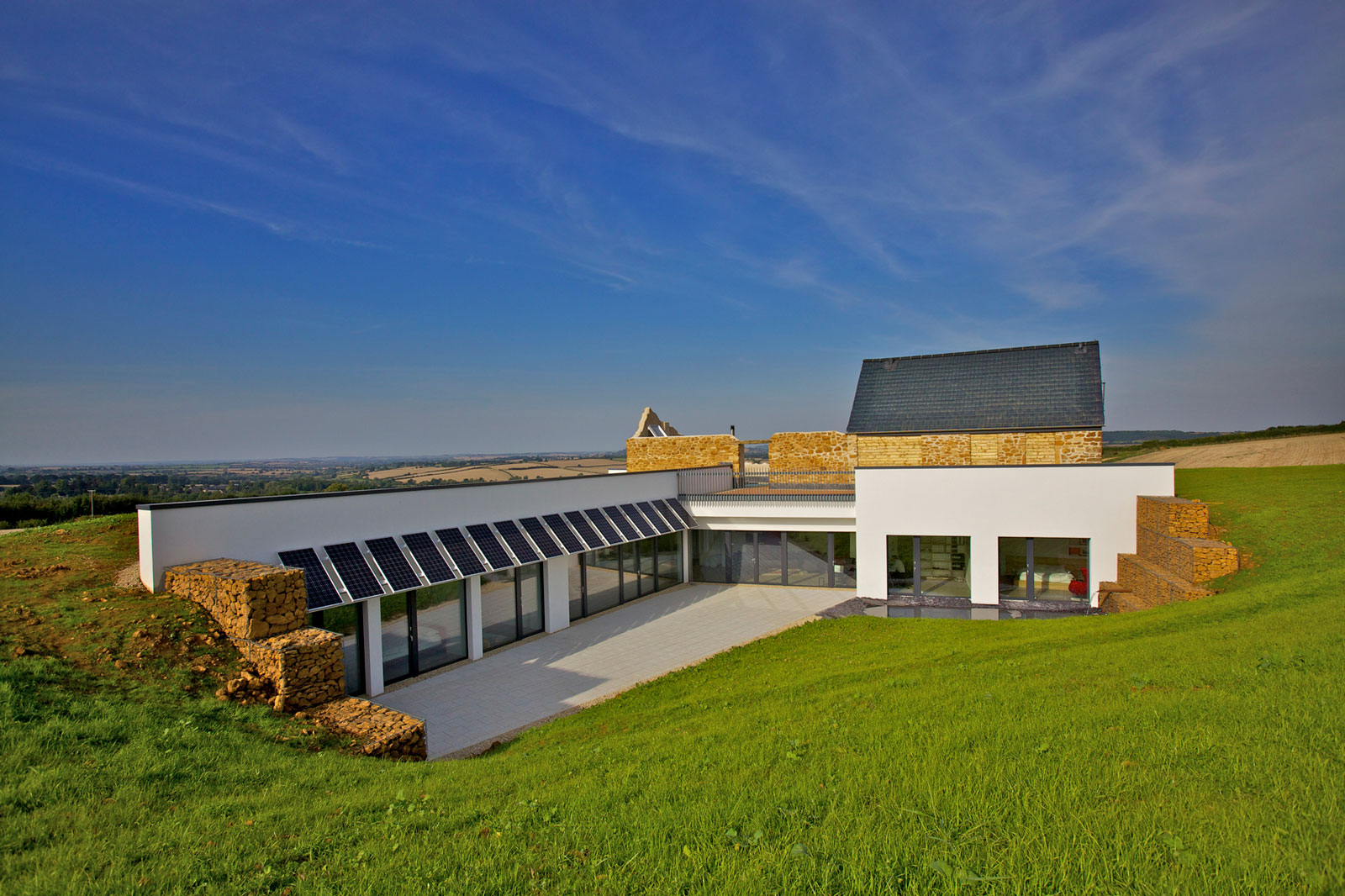